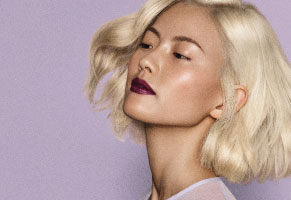 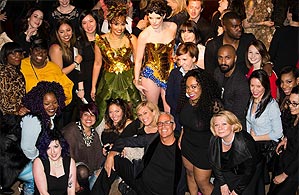 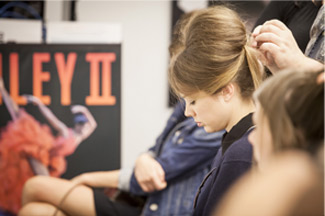 Hauns Korpela is Scott J’s Creative Director, a master of delivering looks that people crave in their everyday life. Cuts, colors and styles that flatter and inspire our guests. Striking editorial looks for models in ads and fashion layouts.

But it’s not just about the hair we all want to wear. Hauns takes the art of hairstyling to new heights (literally, sometimes) with his innovative avant-garde looks. 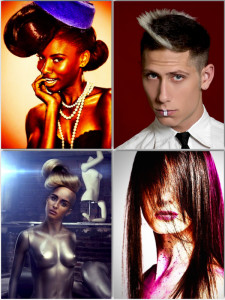 Hauns recently entered two remarkable photo series into the North American Hairstyling Awards, in the categories of Avant Garde and Hairstylist of the Year. We sat down with Hauns to dig into his creative process and find out just what it takes to pull off something this cool.

How does your creative process usually begin?

I look at pictures. I have a drive that has nothing but pictures on them, and I’ll flip through them and envision what I could do with this. Then I’ll do a rough draft on a mannequin head and snap a picture of it, and that’s how I start the storyboard for myself.

Sometimes I’ll send it to the photographer or the makeup artist and say “How do you feel about this shape in general?” If they say, “That’s crazy,” I know I’m onto something. If they say “That’s nice,” I trash it.

Your Avant Garde images are haunting and evocative. What inspired them?

The Avant Garde category is our version of couture. You can create odd-shaped things that are over-the-top, and you’d never wear your hair like that in real life, but it represents a fashion. For the Avant Garde category we had to use actual hair, not headgear or the magic of Photoshop. Everything has to be real in the sense that what you see has to be made out of hair.

The theme I chose for Avant Garde was inspired by the Victorian era, when women used to curl their hair and keep it all piled up and wrapped in a scarf to protect it. Throughout the series, the woman’s hair is in the middle and the “scarf” wrapped around it is more hair. Even though I know most people might not connect that colored hair to a scarf, it helped me place the color around the brown or blonde hair. 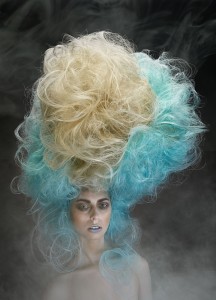 How did you make those headpieces?

The pieces are actually frames that I made from things you tend to use in sculpture, like coils or mesh wire. All the hair itself is pre-colored synthetic hair, which I would mold and attach to the frames. The synthetic hair is individual strands of hair about 36 or 42 inches long. I covered an ironing board with aluminum foil and loosely draped the hair along it and sprayed it with spray adhesive so they made panels of loose hair stuck together. For the brown hair rolls in the middle, I rolled the panels up. For the colored hair, I wanted a more billowy and airy effect so I pulled them apart a bit and then could fold and drape them. 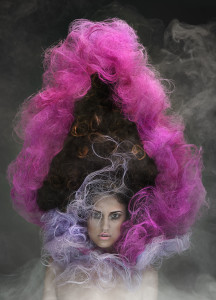 The overall effect of the images are almost ghostly. What inspired that?

People in the Victorian era died of a lot of weird things. People had that sickly look, with hollowed-out cheeks and haunting eyes.

We wanted them to look expensive and sickly at the same time.

We put the smoke in because we thought it would add a haunting mystery, to give the pictures a little more wow. 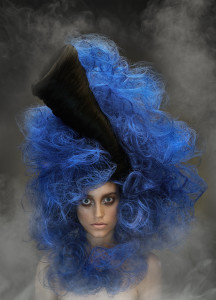 For your Hairdresser of the Year series, the looks are a little more true to life, but still fantastical. How did those images originate?

When I start the creative process, I look at how things are photographed in different light. The inspiration started with a photograph that I had seen online. It came from a movie and was very haunting — a rabbit standing in a stairwell.

It was very stark. I loved the lighting of it, and that’s what kicked off the way the images ended up being lit from the background. We wanted to capture that same mood. It reminded me of old theater, backstage, where they would just have a drop light in a dark-lit room where the actors are getting ready. It inspired me and I thought a cabaret theme would be fun.

Once you had a “cabaret” theme, then what?

I literally pulled out the movie Cabaret! I watched it 4 or 5 times on my iPad, snapping images that I thought were cool. I took images of the stars, but also audience members and chorus girls in the movie. 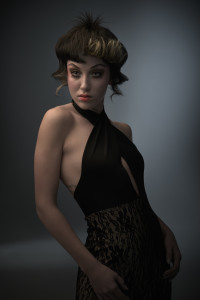 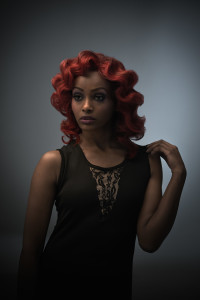 How much help did you have?

For the Cabaret shoot, I did all the hair by myself and all the prep work in getting the hair done. I had a colleague, Dawn Schenk, helping me formulate the hair colors but it was all my application. On the day of the shoot I had a team of two to three people helping. When we’re actually working with models it takes a little village.

While the images in this shoot are obviously based on cabaret, they also blend in unique elements. How do you evolve these ideas so that they’re inspired by a genre or by an idea, and not just a remake of it?

Cabaret was the jumping-off point, but the bigger inspiration came by looking at how fashion rotates itself through the years. I tend to Google different eras and see the celebrities of that time, even old family photos, and look at how women used to wear their hair. I like to see how they actually looked and then blend it with something more current.

For instance, I was sifting through images and a picture of Cher from the late 70s came up and she had a wide, pointy Afro that I thought was interesting. That made it into the final cut. 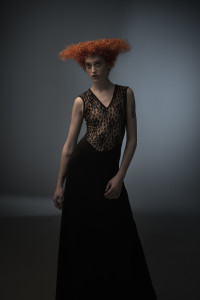 The little bobs are Cabaret; the color inspiration comes from today, like the silver-grey. That’s more inspiration from today; what’s on trend now. The same with the lime green— melting the lime green into the blonde was just to make something very traditional look fresher and newer. 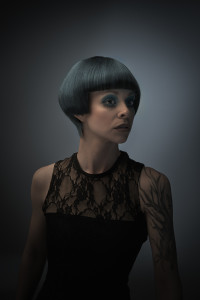 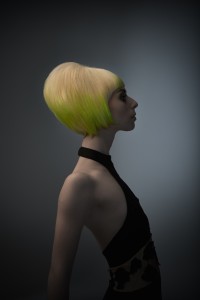 Some things show up better in photographs than others. I always tell young hairdressers starting out to photograph what they’re doing. It’s different looking through a lens. When creating something, what you see in your mind’s eye and what you see in the photo are often two different things.

For me, the hardest part when you look at hair is lighting. Some things don’t light very well, and some things show up better than others. So I get input from the photographer. Even though it’s a personal project, collectively you want a team to help guide your eye. Involving a team usually means that everybody brings something more interesting to the table, and it inspires you to take it to another place or maybe do something you wouldn’t have done on your own. For these shots, I got incredible input and creative collaboration from makeup artist Anna Conte, photographer Corbin Thomas, and fashion designer Michael Plosky.

How much input did the photographer have in these images?

Corbin hated them when I first sent them to him! But once we got them on the set, he loved them.

I knew up until then that I was making him sweat, and that’s how I knew we were on the right path.

He was having to think about them — and when you look at something and it makes you think, we’re in the right place.

If I get good feedback then I keep pushing with that idea. And you know, “good feedback” isn’t necessarily a positive reaction, it’s a strong reaction. When it invokes emotion, it’s good. When people are polite about it, I know something has to change. 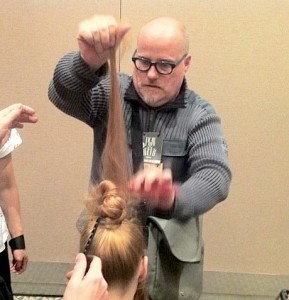 Hauns is based in Scott J’s flagship location on the Upper West Side and takes appointments on Wednesdays and Thursdays. Follow him on Instagram!